Welcome to the Customer Gallery. This gallery features installation photos and comments provided by Aspen’s Evolution Flight Display customers. Select the make and model you wish to view from the menu on the left. To add your own story and pictures, please register for access to the Customer Port via the Submission/Registration tools below.

If you’d like to edit your existing Gallery post, log into the Customer Port and select ‘Edit Profile’ at the top of the page. Here you will find a section for editing and adding Aircraft, as well as a section for updating the personal information shown under your aircraft. 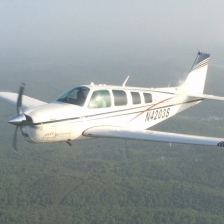 I am a professional pilot with CFII, MEL, Tail Wheel, King Air 200, and SIC BE400 current. Owner of a 1986 Malibu and Piper Warrior. Flying has been in my family since the early 60's when my Dad and his brother bought a Cessna 120 while still in high school. Farm boys from Clinton, MO learned to fly and honed their skills out of dirt strips. The airplane they flew came from money they earned hauling hay in the summers. Dad passed his passion on to his mother, who was his 1st student at 50 years of age. She went on to earn her Gold Seal CFI and was very involved in the Missouri Pilots association for years. Fortunately for me, I loved flying as well, since I didn't really have a choice with my Dad and Grandmother being avid aviators. I wanted to find a career that allowed me the opportunity to fly GA aircraft and use my business degree, so Aspen Avionics was a great fit. I've with Aspen since 2007.

My Panel (Before and After)

The 2002 Cirrus had a pretty standard six pack when I bought it. I had the EFD1000 Pro installed over a year ago, which added tremendously to the panel and overall functionality. The new III Tube system is another level above that. I now have the EFD500 MFD, EFD1000 MFD, and EFD1000 Pro Plus. I also had the EWR50 installed. It is Aspen’s XM weather receiver which gives me the weather with a push of a button.

I've been flying with Aspen in my panels since 2007 and have accumulated over 4000 hours in various aircraft behind the Aspen screens. I started with a Cirrus SR22, then changed to an A36 Bonanza, and now own a Piper Malibu. All three aircraft had Aspen 2500s installed. I also own a Piper Warrior that has been in my family since 1979..it also has an Aspen 2500 system. The best things about Aspen product line are they interface with almost ALL existing GA avionics and autopilots. So it doesn't matter if you have an older NAV/COM or GPS, the Aspen system will work with them. Aspen also works with the latest and greatest avionics technology and digital autopilots. Having this flexibility gives you a wide swath of options and capability when installing an Aspen display. Now with the MAX technology, you can remove the entire older "six pack" instrumentation and use two Aspen screens to replace your analog gauges. This gives you the flexibility to cut a new panel, remove old vacuum pumps, etc. I really like the fact that the displays are very customizable from a users perspective. Each individual's brain works differently, so having the ability to layout each screen to one's liking and not being pigeon holed into one layout or "look" is a huge feature.